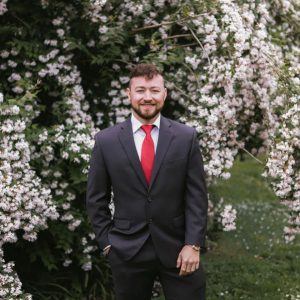 I went to Calvert Hall and graduated in 2017. While there, I was a McMullen Scholar, a guitarist in the Jazz band, and a member of the wrestling team for four years. I went on to attend Cornell University, studying Business with a focus in Finance, Accounting and Real Estate. Upon graduation, I was recruited by and joined a prominent Cornell alumnus’ commercial real estate firm based in Florida. I currently live and work in Miami and have plans to commission as an officer in the Army National Guard as well.

I received a full scholarship to Cornell through its Naval ROTC program. My freshman year, I became a member of Sigma Phi Epsilon fraternity. Sophomore year, I was elected as Treasurer of one of Cornell’s largest student-run businesses, the Cornell Media Guild. At Calvert Hall, I received a full, four-year Marion Burke Knott scholarship and was selected as a McMullen Scholar. I graduated in the top 5% of all 2017 Maryland students as a National Honor Society and French National Honor Society member, a National AP Scholar, a Maryland State Scholar of Merit.

How did SJA Prepare you for the future:

I would say that SJA gave me an advantageous head start on learning how to build meaningful relationships. Networking and being comfortable talking to others was a skill that I had many opportunities to practice while at St. James with parents, visitors, teachers, and staff alike. I can look back now and realize that my love for communicating and working with others began while at SJA and I have been able to build and leverage this skill to foster many meaningful opportunities in my life. Moreover, without St. James, I don’t think I would have found the deep love of learning that has continually inspired me to work harder and gain the most that I can from every opportunity presented to me.

My favorite SJA memory would have to be working as a member of the SJA radio crew as we were building the studio and developing the format for our broadcasts. Being so involved with and responsible for something new and exciting at school was an amazing experience, and I have to shout out to Mr. Edel for being such a patient and caring mentor for the whole radio team. Students will find that there are tons of opportunities to make an impact at SJA that are enriching, meaningful, memorable, and fun.